Supporting Immigrants and Creating a Dignified Pathway to Citizenship

Join NETWORK’s Government Relations Director Ronnate Asirwatham on Wednesday, March 17 at noon Eastern for “Immigration Policy Update: Where We Are and Where We Are Going.” Register here.

Right now, asylum seekers are forced to continue waiting in inhumane conditions at the southern border, immigrants are detained in almost entirely uninhabitable detention facilities, and immigrants seeking a visa or green card — even those with family ties — face unreasonably long wait times. It is clear that our broken immigration system is failing to meet the challenges of our current reality.

Recently, there has been some positive policy change. Some immigrants who had been waiting at the southern border are being allowed into country, immigrant children are being taken care of and families are not being detained for a long periods of time. However, because of xenophobic rhetoric and often-racist anti-immigrant sentiment, racist immigration policies continue. Black and Haitian asylum seekers in the country are still being expelled and deported without a hearing. 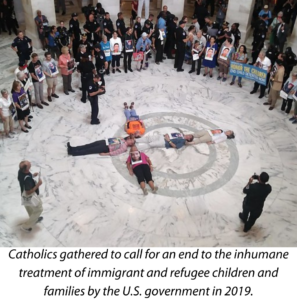 Building on a culture of fear and scarcity, some political leaders draw false distinctions between the U.S.-born population and immigrant families, setting up a fabricated competition for jobs and resources. This overlooks the fact that 17.4% (a sizable portion) of the U.S. workforce is immigrants; our economy could not survive without immigrant workers. And immigrants are an important part of our families and our communities; a quarter of children in the U.S. have at least one immigrant parent. The unjust treatment of immigrants and systemic racism against immigrants of color is a critical area to build anew if we hope to shape a more just and inclusive democracy.

The COVID-19 pandemic has shown us that regardless of whether someone is Native American or descended from enslaved ancestors, or how many generations removed from an immigrant relative they are, we are all one community and our health and wellbeing depends on one another’s. Policies that prevent immigrant families from accessing legal immigration status and needed resources for food, housing, and health care are unjust and hurt not only immigrant families but also the entire country.

Addressing immigration issues at the southern border, reducing immigration court backlogs, and reuniting families that were cruelly separated are necessary and need to be addressed immediately, but we cannot be limited to just fixing problems created during the four years of the Trump administration. Our immigration system has been broken for decades and we must build anew with a vision of inclusion and welcome for the future of our country.

The Power of Transformative Imagination

Last fall I had a conversation with Leonel,* a migrant from southern Mexico who fled death threats from organized crime in 2019 and continues waiting in fear in Nogales, Sonora, Mexico with the hope of one day soon accessing the U.S. asylum process. It was a difficult conversation, and Leonel expressed that he and his wife still live in fear each day, knowing that the organized crime group that terrorized them in the South may well have connections in the North. He had already relocated once before, and they tracked him down.

There came a lull in the conversation, and I asked him, “Leonel, if you could imagine an immigration system in which people were treated with respect and dignity, what would that look like?” I remember he said there would be no wall — there would be no border. More than anything, though, I remember that for the first time in that conversation there was light in his eyes, a light of possibility. He sat a little taller and looked me in the eye. I hadn’t promised him anything or given any false hopes about the current reality. All I did was invite him to imagine. That imaginative space transformed him, if only for a few minutes.

Lent is a time of transformation — of turning our painful desert moments into places of contemplation and prophetic possibility. In Paul’s letter to the Ephesians, he celebrated Jesus’s transformative, liberating action for God’s people, even “when we were dead.” In order to welcome this transformation, however, we have to make space to imagine.

Transforming our personal ways of thinking, praying, acting, as well as transforming our politics, requires clearing space to imagine. It means moving beyond questions like, “What is politically feasible?” and “What is realistic in this climate?” and instead imagining the mountaintop we’re climbing toward as a starting point. After all, Jesus didn’t say to the blind men, “Would it help if I give you a cane?” or “Would you like me to guide you by the hand?” He said, “What do you want me to do for you?” and responded to the depth of their imagination: they wanted to see. (Matthew 20:29-34)

Written by Sister Tracey Horan, SP. Sr. Tracey is the Associate Director of Education & Advocacy at the Kino Border Initiative in Nogales, AZ.

Your faithful call you many names.

You are Allah, to your Muslim children and Lord to your Jewish and Christian children.

Your Sikh children call you Akal Purakh, while your Hindu children know you as the trinity of Brahma, Vishnu, and Shiva who incarnate regularly into the world to bring peace and hope

From the beginning of time, O Holy One, you have sent messengers to announce your presence. Your faithful believe you called and sent those messengers, from Abraham to Jesus to Mohammed to Krishna to Guru Nanak, into our world to protect the weak and powerless.

So we call upon you now, Divine Creator, to renew us with your message of justice. Open our eyes to the millions of your children who are migrating in the hope of finding peace and safety. Direct our steps to embrace them in the spirit of sisterhood and brotherhood. Strengthen our will that we might sacrifice for them and speak out as their allies. And, most importantly, open our hearts to the immense gifts and goodness that they bring so that we might accompany them as partners as they enrich our lives and our nation.

Written by Father Corey Brost, CSV. Fr. Brost is Executive Director of Viator House of Hospitality and Co-Founder of the Children of Abraham Coalition in Chicago, IL.

Take action to help young immigrants who are essential to our nation by supporting the bipartisan Dream and Promise Act (H.R.6) and the Farm Workforce Modernization Act (H.R.1603).  Both bills protect and support our immigrant family members. These bills remain a step forward towards our ultimate goal of creating a pathway to citizenship for all 11 million undocumented immigrants.

“Hi, my name is [NAME] and I am a constituent from [TOWN]. I am calling to encourage Representative [NAME] to support the Dream and Promise Act and the Farm Workforce Modernization Act. We have called so many of our immigrant brothers and sisters essential during the pandemic, but continue to deport them. These important bills would create a pathway to citizenship for immigrant youth, TPS holders, and farmworkers. Both bills have bipartisan support and would provide permanent relief to many immigrants who have lived and worked in our communities for many years. Please vote in solidarity with immigrants, working people, and families. Thank you.”